I wrote "My Story" just after the Suspension of the Live Export Trade in Australia.  At the time there was a lot of "farmer bashing" going on, saying that the farmers of the north didn't deserve a livelihood if we relied on Live Export, we deserved to go bankrupt, we were cruel and lots of very awful and un-true things.  Thankfully things are slowly settling down, and most people are realising that at the moment there is no other option for cattle producers in the north of Australia (although there are still some out there who disagree). 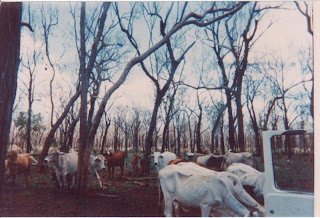 Posted by Kids, Cattle and Mobile Phones at 09:01