This post is a family affair.  My Aunty,  Beth Duncan, wrote the following about her Grandfather (my great Grandfather), Hugh Kenneth Goodwin "Ken" for her local community newsletter.  This story has been told to us growing up but seeing it in writing makes it different.  We have all seen that magic scrap of ribbon and we all are astounded by the bravery shown by my great grandfather and no doubt the men and women he served beside.

The photos are from my niece Kirsty, who with her sister, Kellie, and other school friends visited some of the French Battlefields and Gallipoli last year.  I was just going to attach a generic ANZAC photo from Google but thought Kirsty's photos give a more personal touch.  They are in no particular order, nor do they correspond to the story,  just interspersed between text.  Some of the captions have links embedded in them, for further information.  Just flicking through them this afternoon has given me goosebumps and made me a bit teary.  The formidable country surrounding ANZAC Cove makes the hair on the back of my neck stand up.  The bravery shown by those who faced that is unmatched. 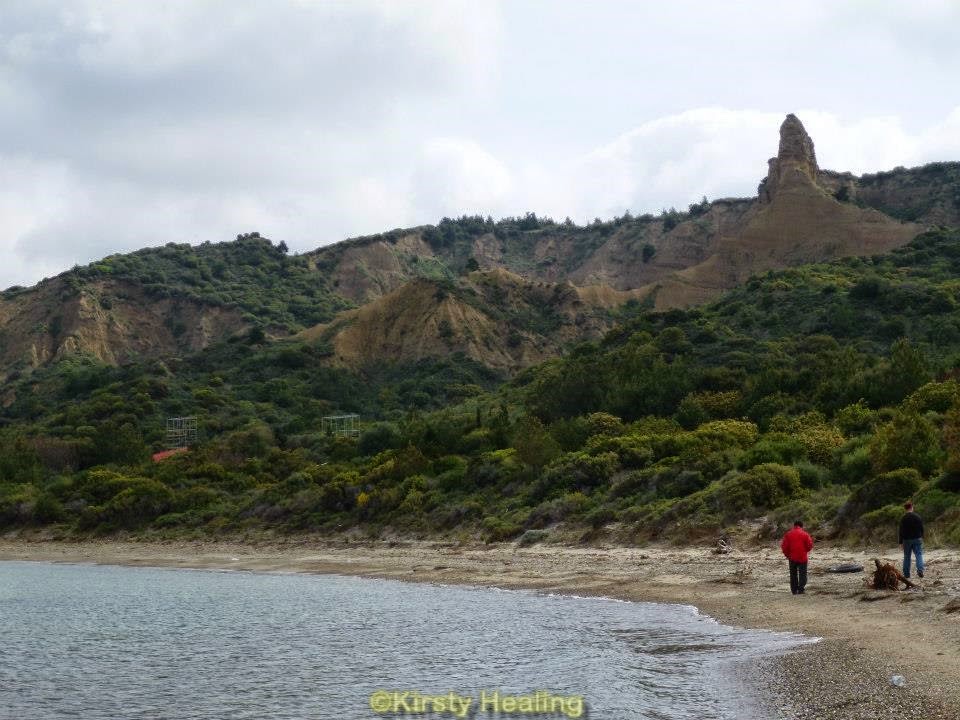 I only hope that some of that grit, determination and courage shown by my Great Grandfather has filtered down to us in these future generations, may we be like him when fighting our own battles, whatever they may be.


This is his story:


World War One 1915
Hugh Kenneth Goodwin, “Ken” a young stockman working at Bowen Downs Station, near Aramac, joined the AIF to fight in the First World War.
As he was boarding the coach (probably Cobb & Co, the route was through Bowen Downs) for Melbourne, the Bowen Downs Chinese cook, Tommy Su, (who was very patriotic) handed Ken a red, white and blue striped ribbon (a collar, taken from around the neck of one of his many cats) as a symbol of good luck.

Ken served in the Battle of the Somme in France. The Battle of the Somme was one of the bloodiest battles in WW1 and “became a byword for futile and indiscriminate slaughter”. After the battle had ended the casualties were – Germans 600,000, British 420,000 and 200,000 French. Ken was the gunner of a 16 pound field gun. At one time he sat on the cannon for 52 hours straight. The constant repercussion had his ears bleeding and his mates carried him off the cannon (he couldn’t walk) and to a field hospital. His mates nicknamed him “Sparks” because they said that in the night, when they were in battle, they could see his eyes flashing. At one time the Australians were retreating on foot from the Germans across a ploughed field. Ken ran with the breech block out of the gun on his shoulders (about 112 lbs) and when one of his mates asked him why brought the breech he replied “So the Hun ba*%@*d’s can’t turn the gun on us”.

In 1918, at the age of 23 years and 9 months Ken was honourably discharged after being gassed with mustard gas by the Germans. He was totally blind for two weeks and he was sent home to Australia on a hospital ship. He had served 865 days abroad and he still had the ribbon.
In 1919, Ken’s father, Samuel Goodwin was sent to Banchory Station in Clermont as Manager. Ken, who by that time had regained most of his health went with his parents to Banchory as a stockman. His first comment on seeing Banchory was “3 or 4 months will see me out in this Godforsaken place”. The homestead was on a ridge and surrounded by bare clay pans and the house had gun slits in the walls for fighting the aboriginals. The 3 months became 29 years. In 1923 Samuel left Banchory and Ken became the Manager.

World War Two    1940
William Claude Gittens, “Bill”  a young stockman at Banchory had joined up and was leaving to fight in the Second World War. Bill, who came to Banchory as an “orphan kid” listed Ken and Bon Goodwin as his next of kin. As he was leaving Banchory, Ken Goodwin (the manager) cut the ribbon in half and presented Bill with one of the halves for good luck. Bill served in the Middle East and was a Rat of Tobruk. The Australians gave themselves the name “Rats of Tobruk” after Radio Berlin described the Australians as “caught like rats in a trap”

The Australians held the Libyan port of Tobruk against the Afrika Corps during the siege of Tobruk. The seige started April 1941 and was finally relieved at the end of November. 14,000 Australian Troops served in the Middle East and they claimed the name “Rats of Tobruk” as a badge of pride.

The Australians were known for their sense of humour and this showed in the nickname Bill’s commanding officer labelled him with... “Sh*&#house Gittens” because of his initials “WC”. Bill carried the ribbon for some time in the war, but while sleeping on a troop train in Palestine his wallet was stolen and with it, the ribbon.

While serving in Africa Bill “souvenired” a rifle cleaner from the belt of a dead German Officer and managed to post it back to Ken at Banchory.

2014... 99 years later, Ken’s half of the ribbon is still intact, although the colours have faded. The rifle cleaner is with the ribbon and still has the grains of the African desert sands in it. Ken never washed his ribbon. He thought he might wash the luck away.


Posted by Kids, Cattle and Mobile Phones at 18:59