They Say Things Happen In Threes

They say things happen in threes, I'd believe that today!

First up, Shane and Clancy went on the quad bike to get the steers in.  Seeing as we've just had a little bit of rain (75mm a couple of weeks ago) the buffalo fly (annoying little fly that bite the cattle and horses making them very uncomfortable) are biting bad and we thought we'd pour some drench on them to help get rid of the flies for a while.  Anyway these particular ones hadn't been back in the yards since we let them out after buying them and they did NOT want to cooperate.  Usually when they're not behaving, Shane will come and drop Clancy back off at the house or at the very least put him through the fence.  But I looked out the front door to see Clancy hiding behind a tree: 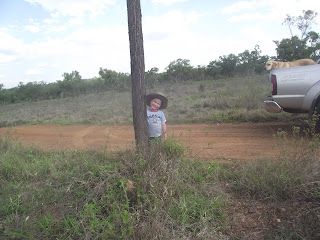 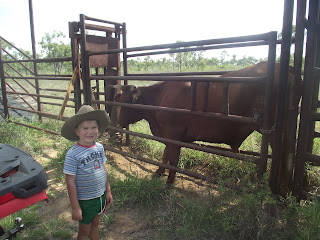 We were driving past a bit later and wanted to get a photo of him but being a boy he wouldn't pose properly! Anyway he was hiding behind this tree because this steer was standing about 10m away shaking his head at him

I somehow managed to leap over the houseyard fence and started running barefoot up the gravel road!  But the survival instincts of Clancy must have kicked in, he wasn't moving from behind that tree and was yelling at the top of his lungs for the steer to "get in the yards".  Once the steer (who hates dogs and most likely thought Clancy was a dog) turned tail and ran so did Clancy!  I was telling him he was a brave boy and he was saying "No I'm not, I was crying".  I would have cried too!

So that was the first "incident" the second was that when Shane came home on the bike we was all hunched over like he had broken a rib or something.  Then when looked at me he had blood coming out of his mouth. He'd hit something while going about 50km/hr through the long grass chasing the cattle and flipped the bike! So he has busted lips, bruised forehead, skin off his nose, shoulder and leg, and a bruised thigh and toe! Not to mention his clothes were ripped to shreds and his sunglasses have been lost somewhere!

After all that we put the steers through the yards to apply the pour on.  Ella-Beth has discovered the video function on the camera and is having a great deal of fun capturing everything on film.   This is how it goes:


The cattle are a little nervous at first, but they soon settle down.  After being treated for flies a few times, they soon start lining up at the gate to the cattle yards when the flies start annoying them! It's amazing how much they calm down after being treated, but then again we all get grumpy when we're getting bitten by some little insect. 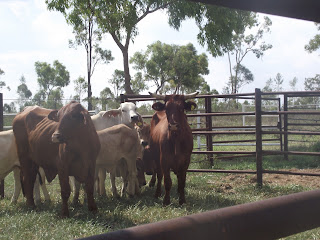 So they were let out, and shifted to a new paddock so the last one can have a spell and recoup.  Came home, had a nice cold drink and Shane decided he'd better go to hospital to get his sore leg and toe looked at.  Five minutes after he left, he rings to tell me there's a small, smouldering fire at the front gate.  I thought he said it was about the size of the car, could I please take some water up and put it out.  What in the world was I going to cart enough water in to put it out.  There's no way I could pull the big shuttle tank on to the back of my car.  So I had a brainwave.  Meet Firefighters Bessie and Clancy Boy, and Chief Fire Warden Buddy (where there's water, there's Buddy) 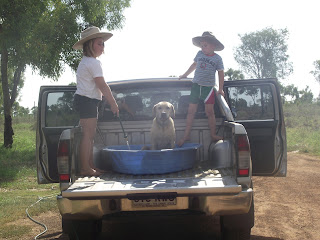 So I get up the road, looking for the fire, I can't see it anywhere, but can smell it.  Turns out Shane said it was only a quarter of the size of the car. 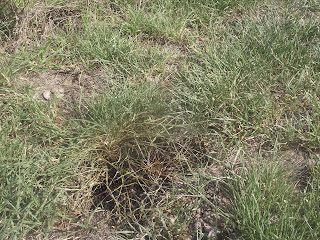 So the water bottle would've been sufficient...

But anyway, all's well that ends well.  Turns out Shane only has bruising, the Xrays' didn't show any breaks which is a relief.
Wishing you all a Merry Christmas and a Happy New Year.
Posted by Kids, Cattle and Mobile Phones at 21:55 No comments: